Disclaimer: This is a sponsored post. Nebia by Moen sent me the Quattro to try.

UPDATE – Nebia is having a 20% off sitewide sale using the code decemberrain2021.

Before we jump into my thoughts and experience with the Nebia, let me give you a little backstory:

There was an outdoor shower at a beach house my parents rented for our family vacation when I was in middle school. I don’t remember the pressure or the specs. I remember being salty and sand-beaten, young and rashy from walking back to the house with sand stuck in my bathing suit.

There’s something about taking a shower outside that just feels better. That was a great shower.

I was lucky to be able to stay in a hotel this past weekend. The bathroom was huge, especially for just one person. The shower was probably six by six feet, encased by glass with a giant, foot-wide shower head directly above.

There was even a little bench secured on one side of the wall. The water heated up quickly – just how I like it. That was a great shower. 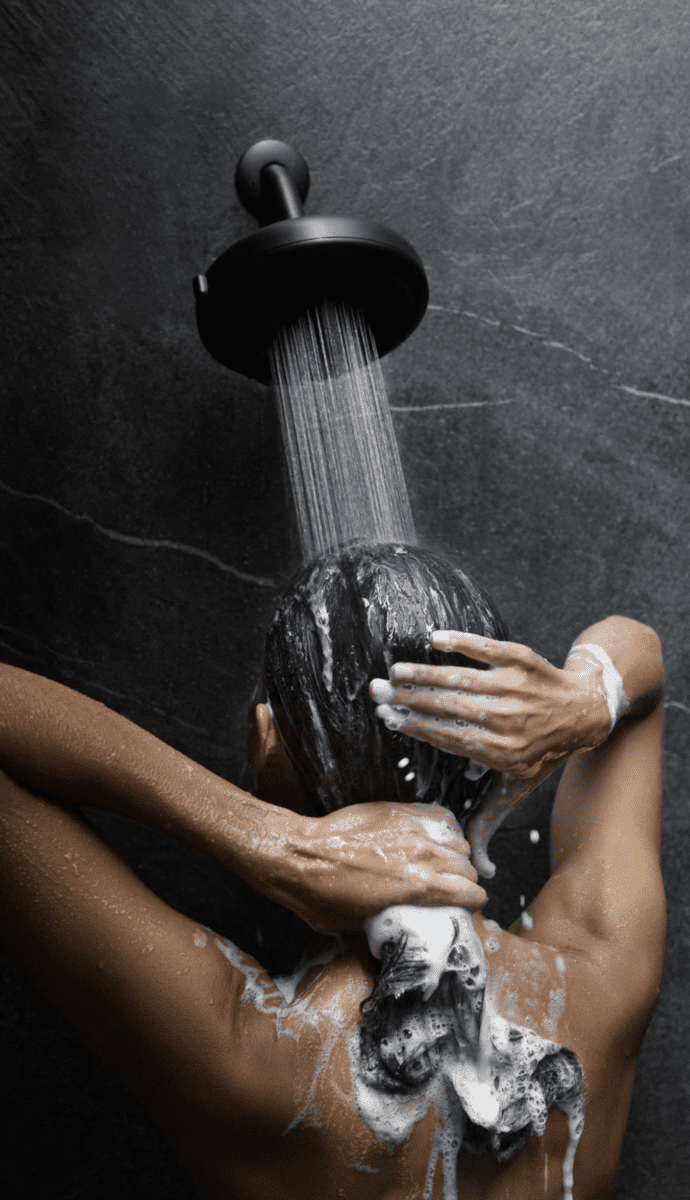 Every so often, I take a rinse in the shower built into the coworking space where I have a studio. Weird – I know, but this space was once lived in, and the people that installed the shower didn’t cut any corners.

A custom-poured concrete floor. Resort-quality shower head, again, bigger than it needs to be. Distressed hardwood floors to step out on when you’re done. The way that the light hits through the open window and filters through the translucent shower curtain at 4:00 on a summer afternoon is something out of an early-2010’s pre-hipster romantic comedy.

It’s beautiful. It is a great shower.

The shower in my house now, well, sucks. The well water takes a while to heat up (especially early in the morning – when you really need it), and dives in temperature if someone else in the house decides to do some dishes or fill up their water bottle.

The pressure is non-existent. No settings, no bells or whistles. And that’s okay – it does the job, and more often than not I’m leaving the shower feeling somewhat clean. 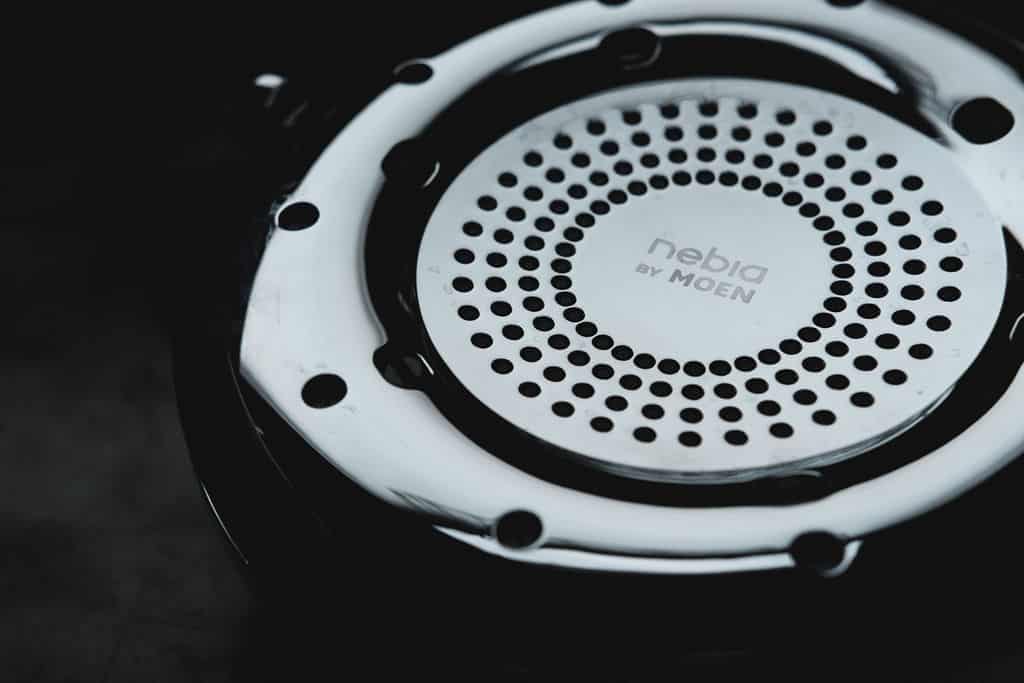 But here’s the thing – if I’m going to romanticize these great showers of the past, why don’t I deserve an experience like that to be a part of the daily ritual versus a once in a blue moon treat?

I suppose, as a renter, that we don’t necessarily think to take those things into our own hands. This is where we begin – the search for an affordable, effective, and luxurious showerhead. We’ll start there.

It didn’t take a ton of research to welcome a Nebia showerhead into my home. Nebia fit the bill for affordability, with the Quattro line coming in at the sub-$120 mark, with other options available for people looking to spend a little more on their bathing experience.

This was about how much I would choose to spend on an upgrade like this – despite this being a product that does affect pretty much every day of your life, I am always inclined to start small given how little I know about what’s good and what’s not from a technical perspective. My dad has always said “invest in a good mattress” – and that’s the same mindset I’m approaching this with. 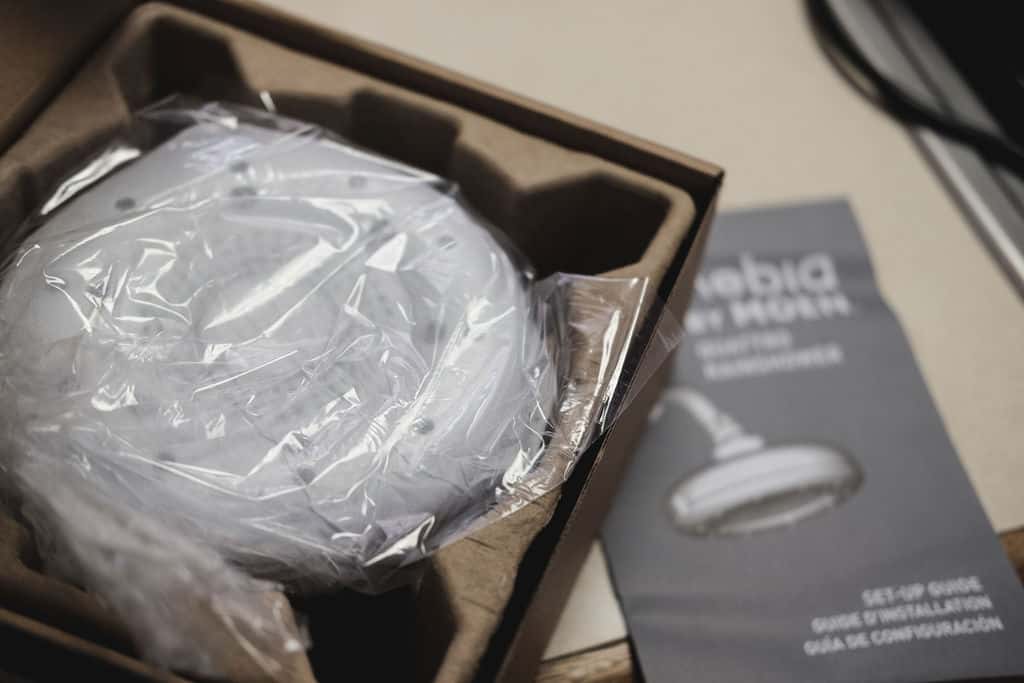 All that being said, Nebia is a pretty cool company. It’s not often that the techy, startup-y vibe mixes in with a practical and tactical home good like a showerhead. The design of their products is really sleek, as is the website and explanations of the science and technology behind the product.

To my understanding, the difference is in the actual engineering of the showerhead, utilizing atomizing nozzles (based on studies of the way jet engines work) to create the sensation of more water while actually using less. There lies the whole point of their mission – elevating the experience of your daily shower while doing their part to make a dent in water consumption. 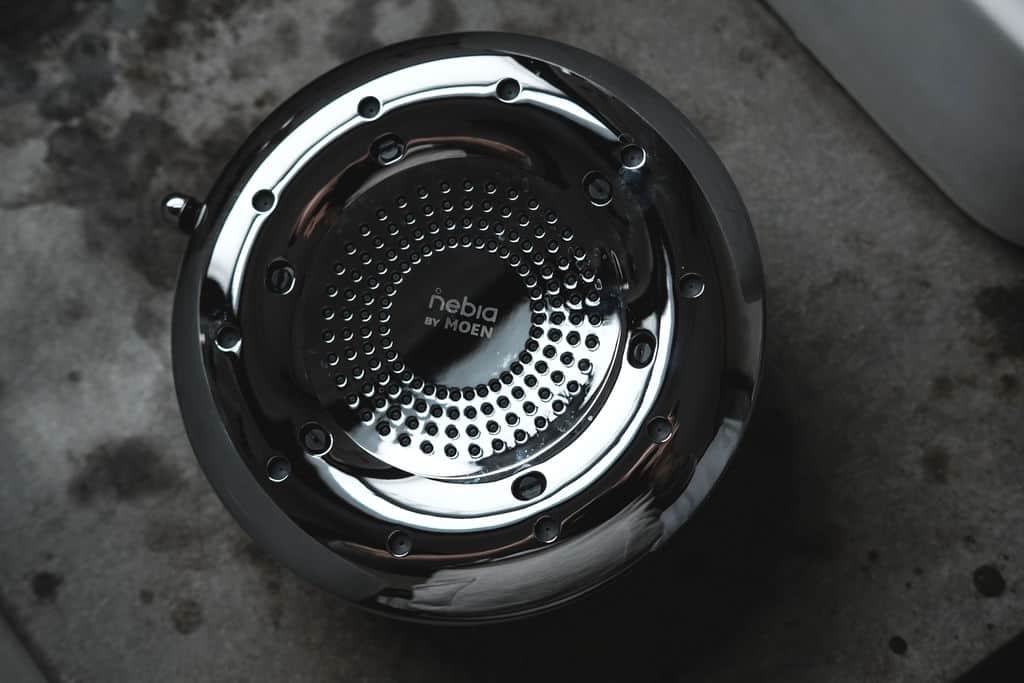 A call-out from their site that caught my eye was their dedication to sustainable manufacturing – the Quattro is made in part by using recycled ocean plastics, like abandoned fishing nets that have been hauled out of the seas.

That’s very cool, and they’re the first showerhead to ever do something like that. I’ll be interested to see over time how they integrate more practices like that into their product line.

Given the dire state of our environment, the buzz around sustainability was a big sell for trying a Nebia product. That being said, I wasn’t looking to completely trade in quality of product and quality of experience. I wondered how a showerhead could be high-pressure and water-saving at the same time. I went with Nebia by Moen Quattro, and I waited patiently to find out.

Out of the Box 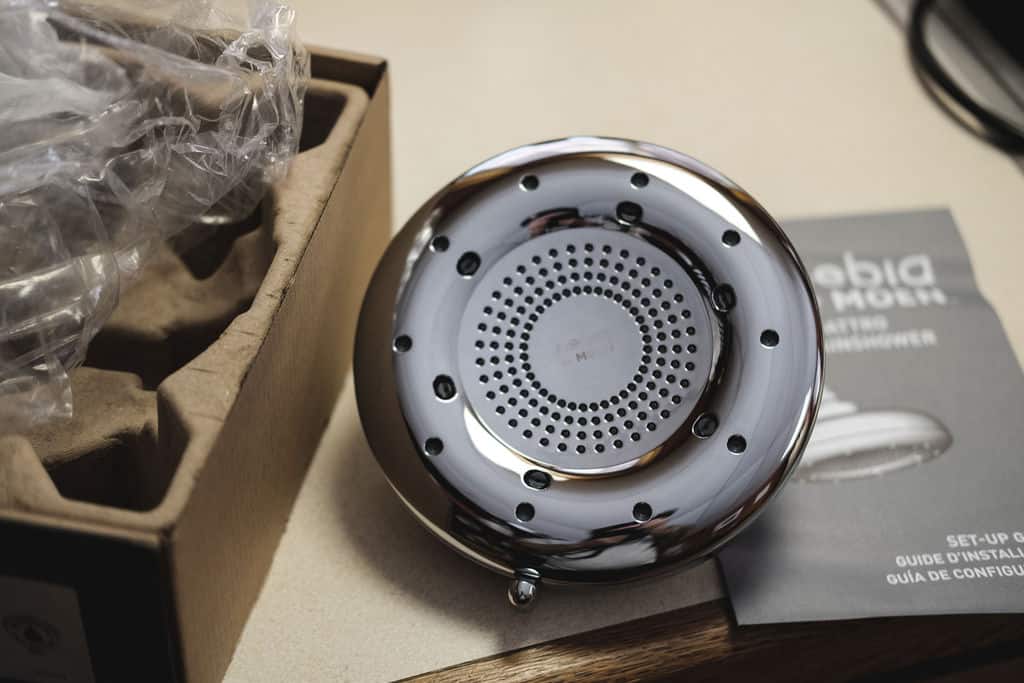 My initial thoughts upon opening the box were pretty simple – damn, this thing is huge. Is it as big as the showerheads in the fancy hotels I was talking about earlier? No.

Does it put my measly shower head to shame? Absolutely.

The package came with little in it – the showerhead (mine is in chrome, though I considered going for gold), minimal packaging, and a very small instruction booklet. I don’t know why I expected more.

Wrenches? Nuts and bolts? A tool kit of some sort? If it isn’t obvious, I’m not a really handy guy. I expected this to be a challenge for me, like most “home improvement” tasks and projects have proven to be. 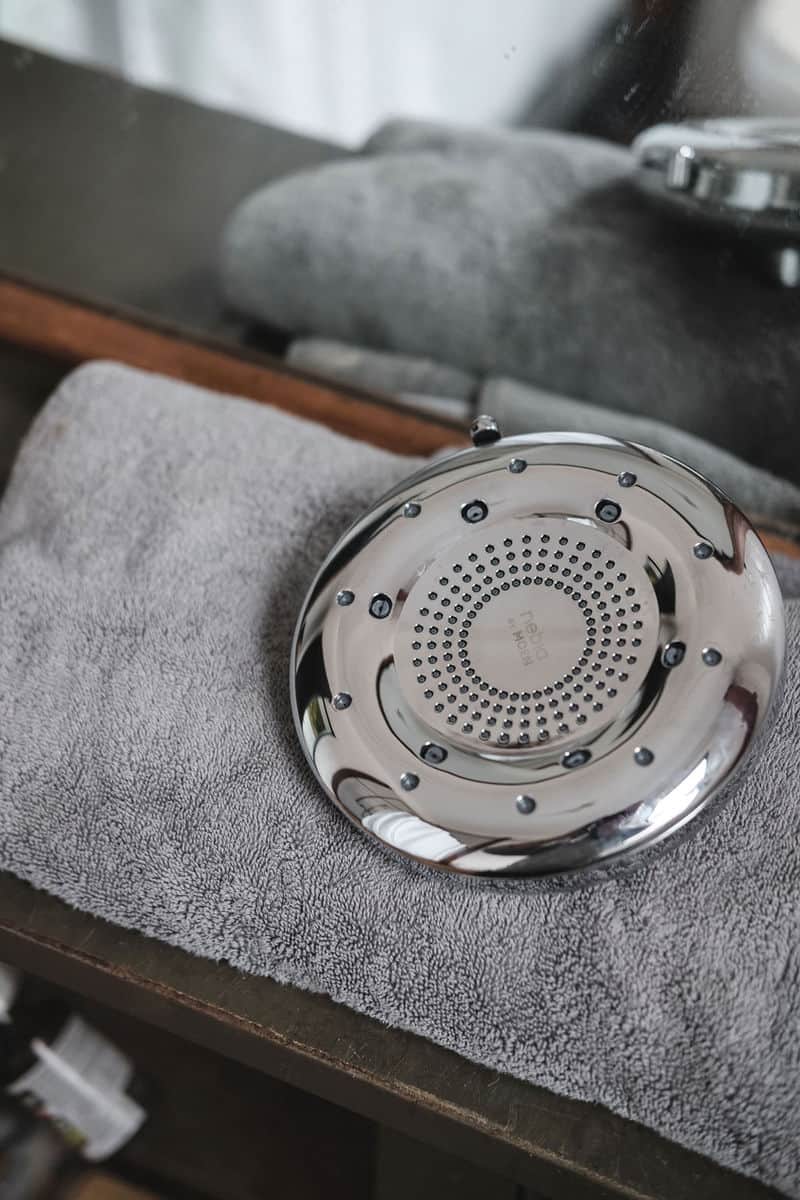 Truthfully, not a ton to say about this. I kind of got worked up over nothing. Installation was super easy – unscrew my old showerhead, and replace it in the same manner with the new one. It took a second to catch, but that was likely user error and a very old nozzle on my part.

I had it wrapped in paper in the box one minute, and it was literally shooting water in the shower thirty seconds later. 10/10 ease for those as mechanically un-inclined as me – and I won’t tell anyone else and blow your cover. You could impress someone!

Getting in the Shower With Nebia

And now it’s time for what you’ve really been waiting for – a Captain’s Log of my first run with a new shower head.

In respect to full disclosure, the time in which I installed the Quattro fell about two hours after I had taken my morning shower already. I took one for the team and double-cleaned, especially given how much water I was saving. It felt like the right thing to do. 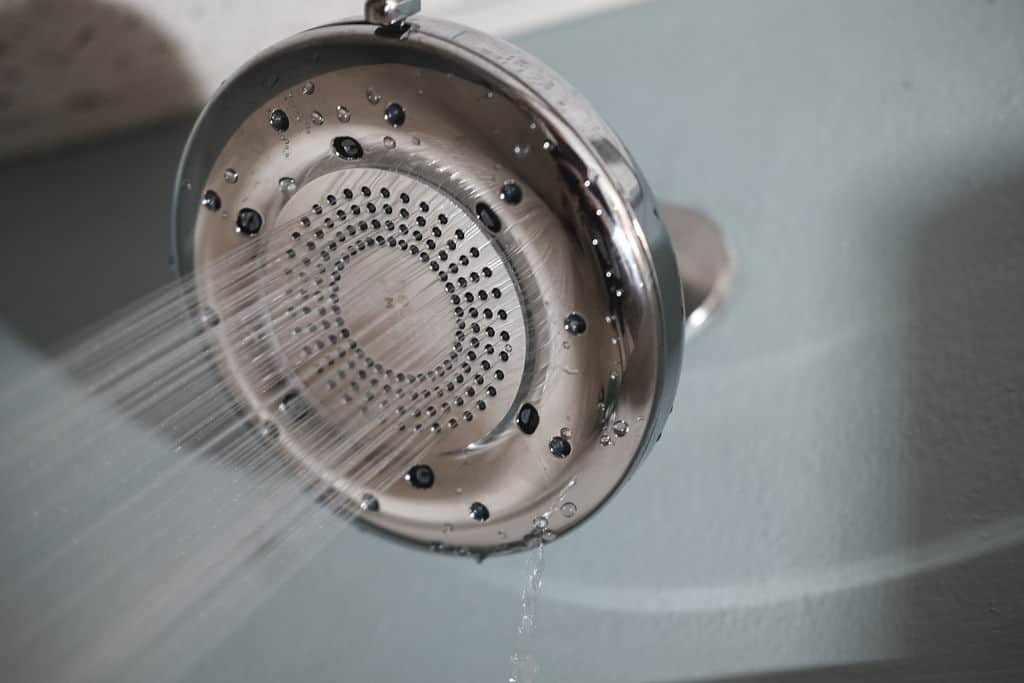 In an effort to have a well-rounded experience, I planned to rotate between all four settings on the head. First was the “angel hair” setting – can confirm, immediately upon turning on, that this setting has nothing to do with the pasta. I like it.

There is no feeling out of the gate that the showerhead is using less water than the old one – the stream felt full and equally powerful across all points. Without feeling the other settings yet, I was pretty sure this would be the one for me, and definitely the one to use when it was time to give my dog a rinse, too. (This is an important consideration in my house.)

The “hard spray” setting came into play for a shampoo rinse. This feels like a pretty standard setting – good pressure, though not blowing you out of the water pressure. The coverage was good as well, with that same feeling that the stream felt equally powerful despite a lower water usage.

The “super saver” setting is a nice option to have, though likely not a setting that I’ll be turning to often. Think of it as a “light” version of the “hard spray” setting, giving good coverage but a few notches down when it comes to pressure. 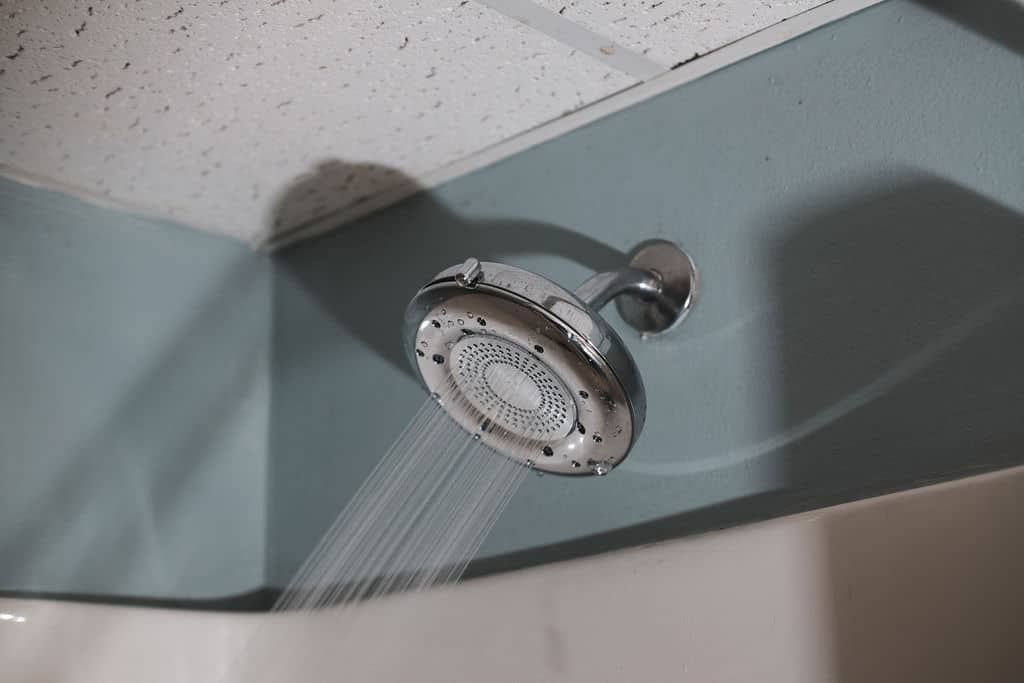 The soft spray setting confused me at first – feeling almost like the water misters you’d find waiting in line for a roller coaster at a theme park in the heat of summer. The weirdness didn’t last long.

Just as I was feeling that the setting couldn’t possibly do the job, the full effect of the softer mist kicked in. It’s spa-like, covering you as much as it covers the area around you for a fuller feeling.

Where the water in my personal shower able to get to the temperature I like it to be at for a soothing hot shower, this would be the setting for me. I think this setting will also come in clutch to cool down on hot summer days.

Here is where the real test comes – did I want to get out when I was done? No. I wanted to take a few extra minutes to stand in the water. That’s a good sign.

Final Thoughts From the Shower

Here’s the bottom line. Did the Nebia showerhead solve all of my problems when it came to my home shower? No, it didn’t, but it wasn’t going to. 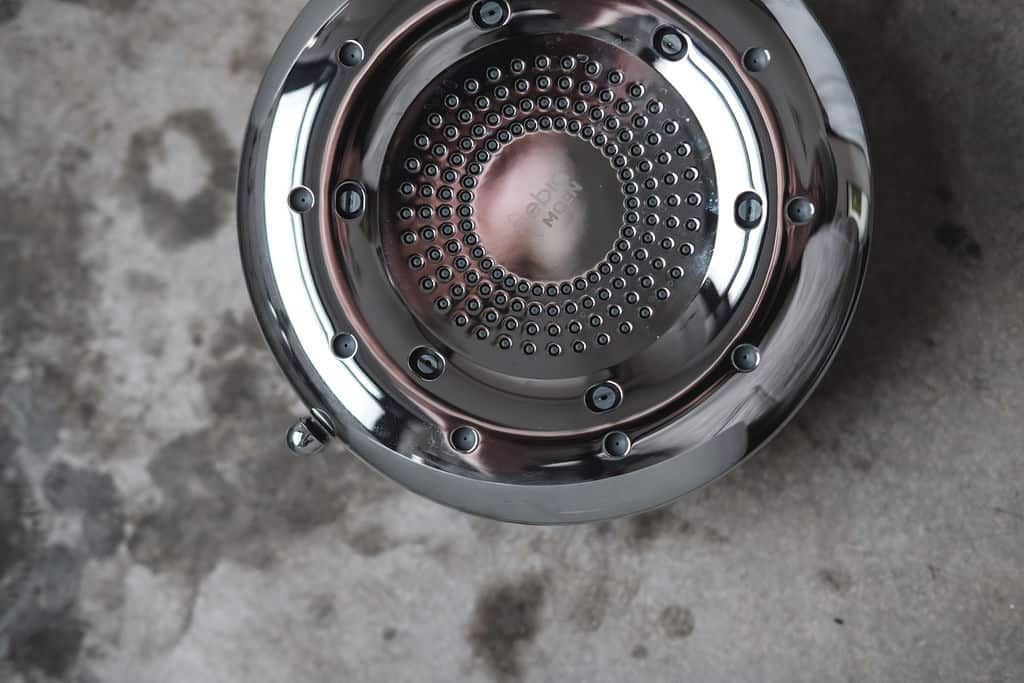 A new showerhead doesn’t address the drop tile ceilings in my bathroom (what the heck, right?). The Nebia showerhead did exactly what I asked it to do – elevated my home shower experience, made me feel a little better about my personal resource consumption, and moved my bathroom higher on the list of the best showers of my life.

And here’s the silver lining – I’m actually moving next week. You better believe this shower head is coming with me.