Photos capture incredible memories throughout our lives. Birthdays, weddings, anniversaries, and overseas trips are just some of the occasions when people get snap-happy. It’s not just our personal lives either, with professional camera operators shooting images of celebrities and famous events throughout the world. They can also catch horrible moments after they have happened. There are many famous photographs showing the aftermath of catastrophic events. But what about those photos taken before disaster struck?

There are many incidents where people’s last moments have been caught on film. These harrowing images depict the minutes before tragedy struck. From the final image of the crew of the Space Shuttle Challenger to a photo of a bear that killed the photographer who took it, these are the most haunting photos taken before disaster struck. 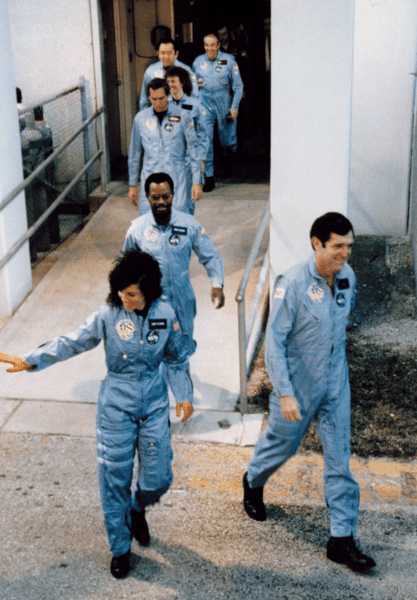 This is the final photo of the crew of the Space Shuttle Challenger before they perished during takeoff. On January 28, 1986, just 73 seconds after launch, the Space Shuttle Challenger exploded over the Atlantic Ocean. All seven astronauts on board were killed. What’s worse, the families of the crew were all in attendance, as was a throng of media, who witnessed the destruction of the shuttle in real-time.

The disaster resulted in the space program going on hiatus for 36 months. The positive to come out of all this was the establishment of the Office of Safety, Reliability, and Quality Assurance. 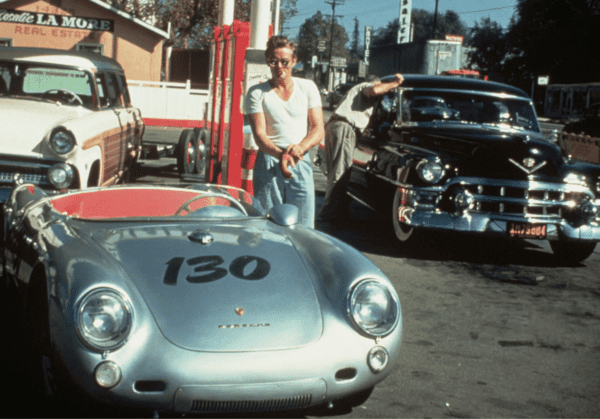 James Dean’s life was cut short at the tender age of 24. The next big thing in Hollywood was as cool as they come. He oozed charisma and sex appeal, both on and off the camera. A known motor enthusiast, Dean drove a Porsche 550 Spyder he nicknamed ‘Little Bastard.’

The picture above was taken while Dean was fueling up the Porsche hours before he was involved in a fatal accident. Heading to an auto rally in Salinas, California, Dean and his passenger, mechanic and pilot, Rolf Wütherich, were involved in a crash. Dean’s Porsche hit a turning car at high speed. While the driver of that car and Wütherich survived, Dean wasn’t so lucky. He suffered many horrible injuries that proved fatal, including a broken neck.

The car itself has been the center of many accidents since, with people believing the car to have been cursed. 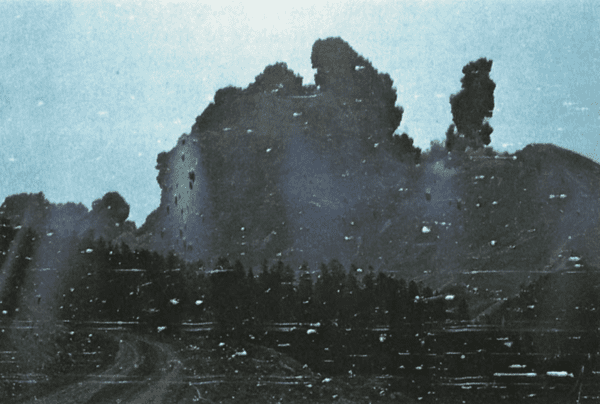 Freelance photographer Robert Landsberg took some incredible images of Mount St. Helens the day it erupted. Unfortunately, these were the last photos he ever took.

Landsberg had been visiting the volcano daily and taking snaps, getting closer and closer each time. An entry in his diary on May 17, 1980, revealed Landsberg felt something big was going to happen with the volcano. The next day St. Helens erupted, but Landsberg was too close to escape. Despite knowing the end was near, he continued to snap away before carefully placing the film from the camera in a case and securing it in his backpack. It’s then believed he laid down on his back to protect the film as the volcano erupted.

Landsberg’s body was discovered 17 days later. The film he took was intact and the photos were published in the January 1981 issue of National Geographic as a tribute.

4. A November Day in Dallas 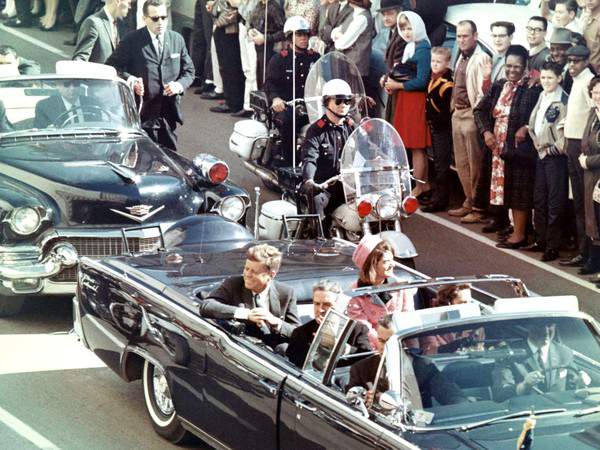 November 22, 1963, is a day that will live on in infamy in American history. At around 12:30 pm that day, President John F Kennedy was shot and killed by an unknown assailant. Driving through Dallas in an open-top convertible with his wife Jacqueline Bouvier Kennedy, the President was fatally wounded by a bullet to the head. The image above is the final photo of Kennedy before disaster struck.

While Lee Harvey Oswald was charged with the murder, conspiracy theories about the government’s involvement in JFK’s death continue to be a talking point even today. 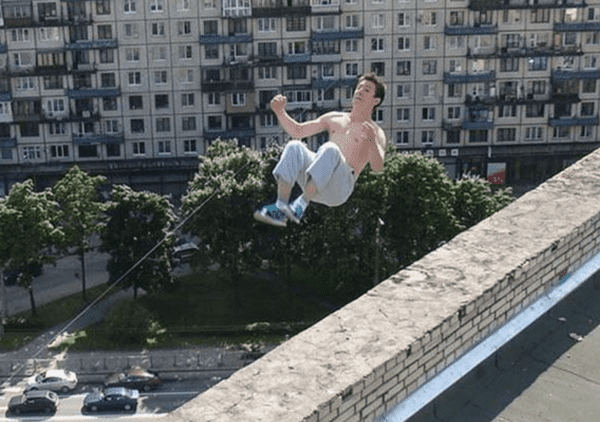 Parkour is an exciting sport where athletes jump from object to object. It is often performed at great heights where the risk of falling is high. But this type of adrenalin pumping danger is what drives the athletes. It also led to the downfall of Pavel Kashin.

The Russian parkour enthusiast was one of the best free runners in the world when a stunt went wrong and cost him his life. In July of 2013, Kashin was attempting a backflip on the rooftop of a 16-story building. He lost his balance performing the trick and fell to his death.

An image taken by his friend captured Kashin mid-trick before things went wrong. While a horrifying image, Kashin’s parents allowed the photo to be made public in hope of raising awareness about the dangers of parkour. 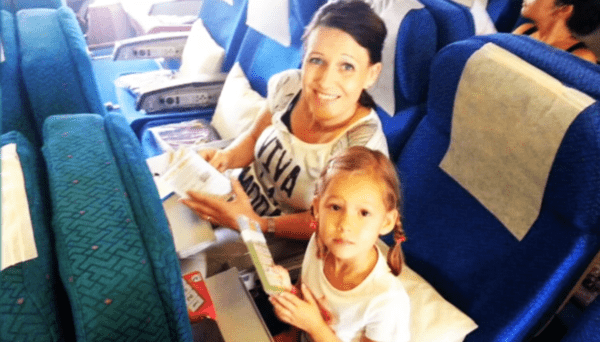 Dave Hally was embarking on his dream vacation on July 17, 2014. He, his wife Kim Hally-Verhaegh, and their 4-year-old daughter, Megan Hally, were flying to Bali, Indonesia. Looking to snap memories of the trip, Hally took one last photo of his wife and daughter before takeoff.

Not long after Malaysia Flight 17 was shot down by Russian forces while flying over the Ukraine. Everybody on board was killed, with rescuers recovering the above photo in the wreckage. 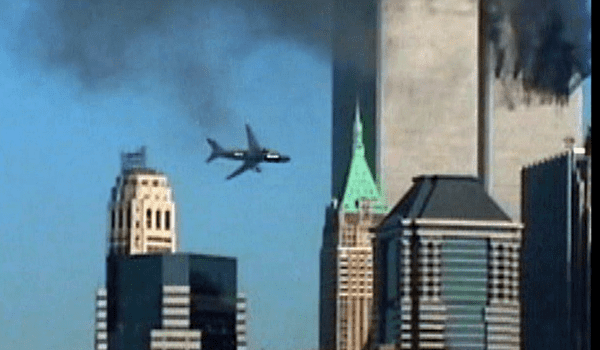 Few photos are as impactful as this image taken on September 11, 2001. The destruction of the Twin Towers in New York is a moment in history nobody will forget. You remember exactly where you were when it happened. This harrowing picture was taken seconds before the second plane hit the towers. It’s a sobering image that still leaves you with a sick feeling in your stomach. 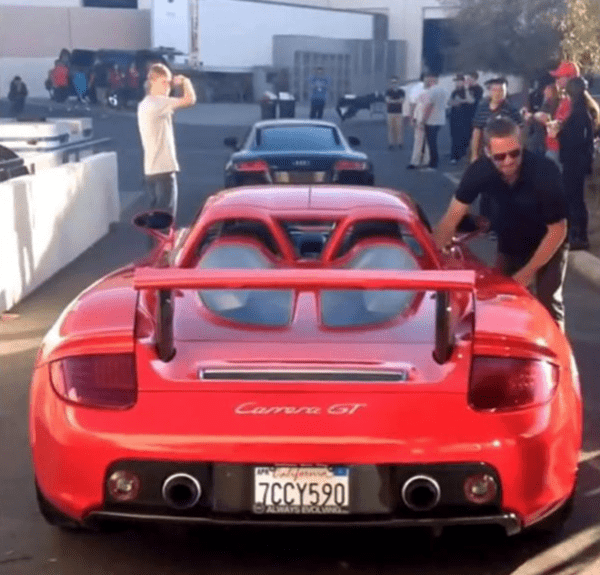 This photo is one of the final images of Paul Walker before disaster struck. The Fast and Furious star was leaving a charity fundraiser in Santa Clarita on November 30, 2013. Captured getting into his friend Roger Rodas’ Porsche Carerra GT, both Walker and Rodas were killed just minutes later. Rodas, believed to have been driving between 80-93 mph, lost control of the Porsche and crashed into a concrete lamp post and two trees. The car instantly caught fire. Both men were trapped inside and died.

It was a tragic event that impacted the Hollywood community. The filming of Furious 7 was postponed until Walker’s family and those involved in the film could come up with a way to complete the movie while honoring Walker’s memory.

9. The Last Image of John Lennon 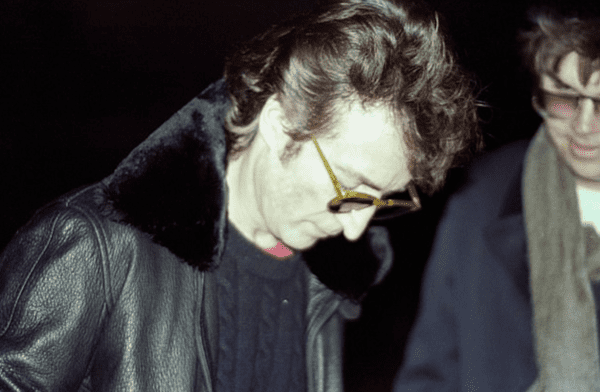 Photographer Paul Goresh never knew his late-night pictures of John Lennon would be the final photos of the Beatle ever taken. What’s even more staggering is who else is in the photos. The five images show Lennon signing an autograph out the front of the Dakota Building, where he lived with his wife Yoko Ono and son Sean. The person getting the autograph in the image above is Mark Chapman, a former security guard.

This might not seem that strange, but later that night when Lennon returned home from the recording studio he was shot and killed by Chapman at point-blank range. It’s incredible to think Goresh not only took the last photos of Lennon alive but that they also contain the man who killed him. 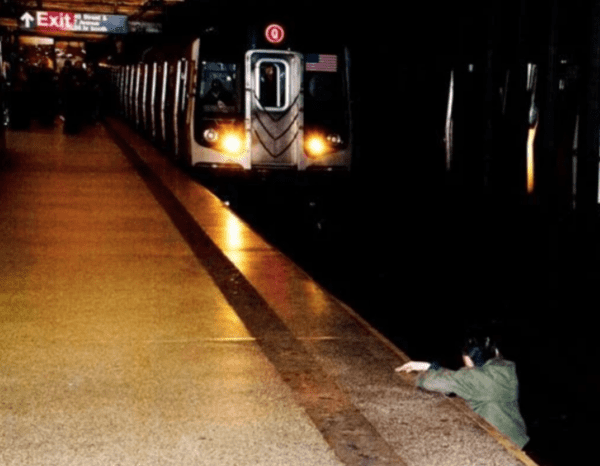 This photo caused outrage when published by the New York Post. It depicts a man seconds before he is hit by the subway train that ultimately killed him. The story goes that the victim, Ki-Suck Han, was pushed onto the tracks by homeless man Naeem Davis (who was acquitted of murder) after an argument.

Watching on, photographer R. Umar Abbasi decided to snap pictures of Han desperately trying to escape the oncoming train. When the photos went public, Abbasi was chastised for not helping Han. While he said he tried to help but was unable to, Abbasi declared he was using his flash to try and get the subway driver’s attention, capturing the photo in the process. 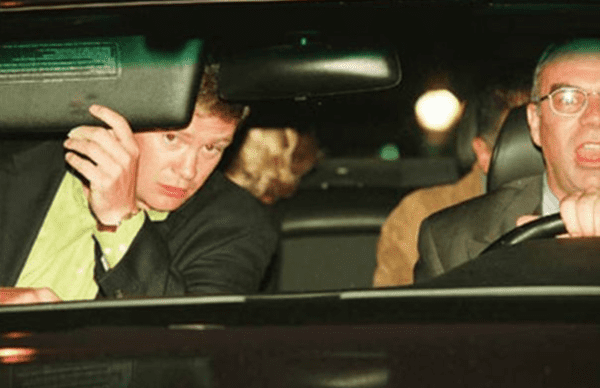 The death of Princess Diana rocked the world. The much loved royal was constantly in the spotlight during her life, which was tragically cut short on August 31, 1997. Diana, along with her partner Dodi Fayed, driver Henri Paul, and bodyguard Trevor Rees-Jones, was trying to escape the paparazzi that was following them. Driving through the Pont de l’Alma tunnel in Paris, the car crashed, killing all on board besides Rees-Jones.

While Fayed’s father claimed the crash was orchestrated by MI6 and the Duke of Edinburgh, driver Paul was found to be intoxicated and speeding, with the blame laid squarely at his feet. 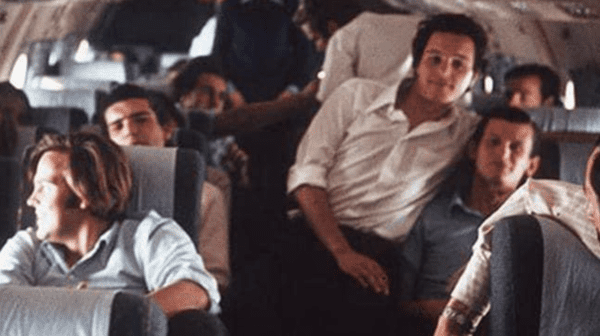 The events of Uruguayan Air Force Flight 571 are one of the most chilling in history. The plane traveling from Uruguay to Chile crashed in the Andes. The photo above was taken moments before the plane went down. Of the 45 passengers and crew on board, 33 survived. But this number soon dwindled to just 16 as injuries and the cold weather took its toll. The search for survivors was called off after 10 days due to bad weather.

Faced with death, those remaining passengers did the unthinkable and turned to cannibalism to survive. The bodies of the dead had been preserved by the cold and provide sustenance for those left. After 72 days, two of the men had enough strength to look for help, eventually reaching civilization and helping get the rest of the survivors rescued. 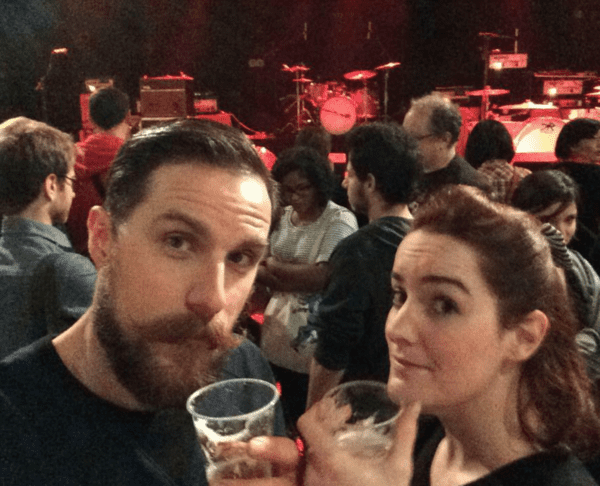 This is the last photo ever taken of Gilles Leclerc. Attending an Eagles of Death Metal gig with Marianne Labanane, the two were excited for a great night when a terrorist attack occurred. Armed men began shooting up the Bataclan theatre in Paris. When police stormed the building after the terrorists took hostages, they detonated explosive vests. 90 people were killed and hundreds injured, with Leclerc losing his life. But he went out a hero, throwing Labanane to the ground when the shooting started and making sure she was safe from harm before he was fatally shot. 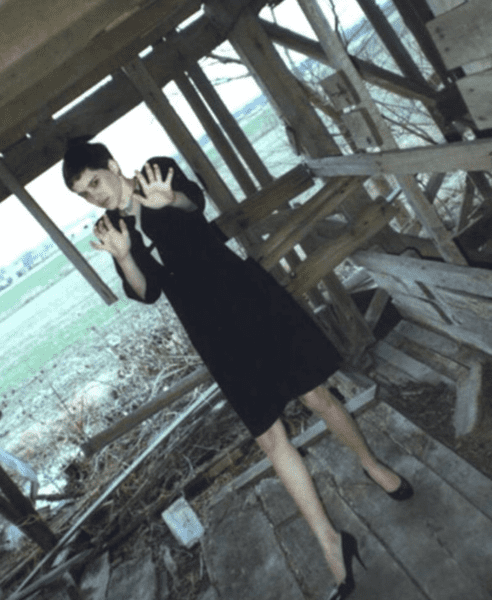 This horrifying image is the last known photo taken of Regina Kay Walters. The sheer look of terror on her face is enough to tell you things did not end well.

Escaping her dreary life in Pasadena with boyfriend Ricky Lee Jones, the two were hitching towards Mexico when picked up by an unassuming truck driver. He turned out to be Robert Ben Rhoades, the man who became known as the Truck Stop Killer.

Rhoades had converted part of his truck into a mobile torture chamber. He quickly killed Jones in front of Walters before keeping her hostage for several weeks. Rhoades tortured and abused her during that time. He eventually took her to a barn, where the above photo was taken, before killing her. Walters’ body was found there by a local farmer.

Rhoades was eventually caught and sentenced to life imprisonment for the several murders, including those of Walers and Jones. It is believed that he may have been torturing and killing people for decades, with his true death count somewhere in the 50s. 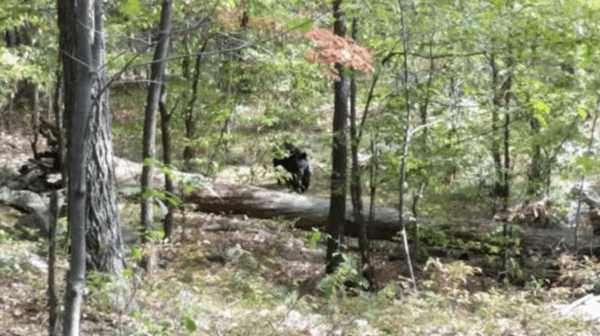 Darsh Patel was with a group of friends hiking in the Apshawa Preserve in West Milford, New Jersey when they noticed a black bear nearby. The bear noticed them too and began moving towards the group. Hoping to confuse the 300-pound animal, the friends split up. Sadly for Patel, the bear picked up his scent and followed him. It didn’t take long for the creature to catch up with him and it mauled him to death.

When investigators discovered his body, the bear was nearby. It was shot and found to have human remains and clothing inside its stomach. Patel’s phone was recovered with bark bites and the above photo was the last image he snapped before trying to escape.

See more about – Who Is The Dumbest Person In The World?